Read on to discover  2 solutions that can revolutionize pooping!

The Art of Defecation

The experience of defecation varies greatly, depending on where you live in the world. Taking a poop in a swank bathroom with heated floors in a Hollywood Hills mansion is obviously quite different than squatting over a dirty crap-filled hole in some sketchy café in Cairo.

For the privileged, the bathroom is not only a place to poop, but a momentary haven, a place of privacy and even leisure. So it’s quite ironic that the modern sit-down toilet is actually “the most ill-suited fixture ever designed” – as appropriately articulated by Cornell professor Alexander Kira in his 1966 book The Bathroom.

Today there’s a growing number of evidence that confirms that the porcelain throne works against our bodies by forcing us into unnatural angles. The setting in the so-called ‘civilized’ world may be right but the device being used is all wrong.

Enter the Squatty Potty, an apparatus that has revolutionized the pooping experience for many including myself. No more straining or feeling bloated.  There’s a reason hemorrhoids and diverticulosis are more common in the industrialized countries than in developing nations.

By placing both feet on the (seven or nine inch) step stool in front of your toilet, your knees are raised above your hips, creating a natural “squatting” position. Compare being hunched-over on the toilet to a kinked garden hose: it just doesn’t work properly. In a squatting posture, the bend straightens out and voila – pooping becomes easier.

The Squatty in combination with a healthy diet and probiotics makes for complete and rewarding bowel movements.  In fact, I know many aficionados like Howard Stern who can’t poop without it.

A 2003 study published in Digestive Diseases and Sciences found that squatters took an average of 51 seconds to move their bowels, as opposed to 130 seconds for those sitting on a standard high toilet. A more recent study by a group of Japanese researchers found that “the greater the hip flexion achieved by squatting, the straighter the recto-anal canal will be, and accordingly, less strain will be required for defecation.”

According Squatty Potty’s statistics, most people are carrying “five to 20 pounds of fecal matter in their digestive system day to day.”

Pooping while traveling through Central America can be quite challenging as is, making the absence of Squatty even more intense. In countries like Guatemala or Nicaragua, toilets are often a place of disgust; a cesspool for potential disease.

The fact is there is a lack of investment in public sanitation and it’s very common to come across signs that say, “Please do not throw paper into the toilet. Use the trash can!” That’s because pipes are old and only one-inch wide so they easily get clogged. And unfortunately many do not adopt the courteous “fold before you throw” technique.

Because you are in a dirty room with foreign feces festering a meter away from you, you’ll likely be squatting (and therefore adopting the best position to poop) but I assure you that the experience won’t be relaxed or enjoyable. (Incidentally, I have come across women who seemingly have no objections to sitting on a dirty rim. Ew! )

Nasties found in dirty bathrooms include E. coli (which can cause bloody diarrhea or abdominal cramps), streptococcus (the bug behind strep throat), or S. aureus (linked to serious skin problems or pneumonia). Keep in mind that germs aren’t only found on the seat itself. They are also lurking underneath. So as you flush, some toilets can aerosolize the contents for quite a distance. Older toilets can spray as far as 20 feet! If you’re using a public toilet that doesn’t have a lid, consider opening the door first before you flush, to get out of the way of the spray quickly.

According to ABC News, the germiest spot in public bathrooms is the floor, which has about two million bacteria per square inch! If you carry a purse or shoulder bag, avoid putting it down on the floor while you’re in the bathroom — hang it on the back of the door if possible.

And remember that the real danger in picking up and carrying around germs comes from your hands. Germs can easily be transfered to surfaces you touch or to your eyes, mouth, or nose — where they can make you and other people sick. That’s why hand-washing with lots of soap and water (rather than dangerous Triclosan) is so important after using the bathroom.

Check out this infographic from Fast Company: 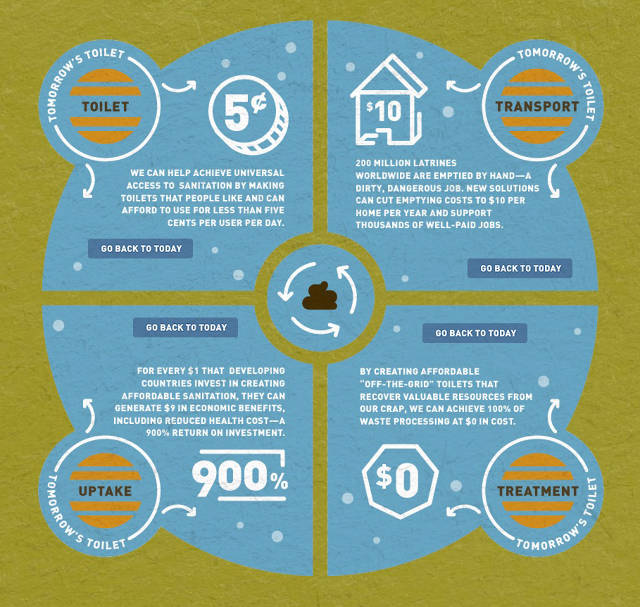 During my recent permaculture course in Central America, which was organized by Running Buffalo Journeys, we got to test a handful of dry composting toilets. The ones at both Atitlan Organics and Instituto Mesoamericano De Permaculturathe (IMAP) in Guatemala were not only beautiful works of art but multi-functional as well.

The ones at IMAP, for instance, were outdoor and  the roofs were optimized to catch the sun. I urinated while nice and toasty.  It was like a regular toilet but better. I didn’t feel like I was putting my health at risk and i felt like my extrement was helping feed the earth. Beside the poop hole, which was outlined with a conventional toilet seat, was a good sized bucket full of wood chippings. Adding a scoop of this ensures there is ample carbon to offset the nitrogen.

How rad is that?

So not only are these alternative toilets odorless and better for the environment, they provide a solution to sanitation and environmental problems in both developed and underdeveloped countries. It just takes a little bit of respect and a knowing that your shit is not going to waste. Add a Squatty and you’re all set!

Here are even more advantages: