In the past 20 years, the widespread planting of genetically engineered crops in the Midwestern United States has precipitated the widespread loss of more than 90 percent of monarch butterflies. Like the honeybee, the monarch is a modern “canary in the cornfield,” an environmental indicator and crucial pollinator.

Now a coalition of the Center for Biological Diversity, Center for Food Safety, the Xerces Society, and renowned monarch scientist Dr. Lincoln Brower have filed a legal petition with the U.S. Fish and Wildlife Service seeking Endangered Species Act protection for these delicate, iconic, and once-common, orange-and-black pollinators.

In two decades, scientists estimate, monarchs have lost more than 165 million acres of habitat — a total area about the size of Texas — including nearly a third of their summer breeding grounds.

The vast majority of genetically engineered crops are designed to be resistant to Monsanto’s Roundup herbicide, a uniquely potent killer of milkweed — the monarch caterpillar’s only food. The dramatic surge in Roundup use with Roundup Ready crops has virtually wiped out milkweed plants in Midwestern corn and soybean fields, where most monarchs are born.

“The widespread decline of monarchs is driven by the massive spraying of herbicides on genetically engineered crops, which has virtually eliminated monarch habitats in the croplands that dominates the Midwest’s landscape,” said Bill Freese, a Center for Food Safety science-policy analyst. “Doing what is needed to protect monarchs will also benefit pollinators and other valuable insects, and thus safeguard our food supply.”

“To put things in perspective, losing that many monarchs is equivalent in human-population terms to losing every living person in the United States except those in Florida and Ohio,” adds Tierra Curry, a senior scientist at the Center for Biological Diversity.

Monarch butterflies are known for their spectacular multigenerational migration each year from Mexico to Canada and back. Found throughout the United States during summer months, in winter most monarchs from east of the Rockies converge in the mountains of central Mexico, where they form tight clusters on just a few acres of trees. Most monarchs west of the Rockies migrate to trees along the California coast to overwinter.

Check out this video on monarchs from the Center for Food Safety:

Monarch Butterflies in Danger of Extinction

In addition to using herbicides with genetically engineered crops, monarchs are also threatened by global climate change, drought and heat waves, other pesticides, urban sprawl, and logging on their Mexican wintering grounds. Scientists have predicted that the monarch’s entire winter range in Mexico and large parts of its summer range in the United States could become unsuitable due to changing temperatures and increased risk of drought, heat waves, and severe storms. genetically engineered crops

Monarchs need a very large population size to be resilient to threats from severe weather and predation. Nearly half of the overwintering population in Mexico can be eaten by bird and mammal predators in any single winter; a single winter storm in 2002 killed an estimated 500 million monarchs — 14 times the size of the entire current population. 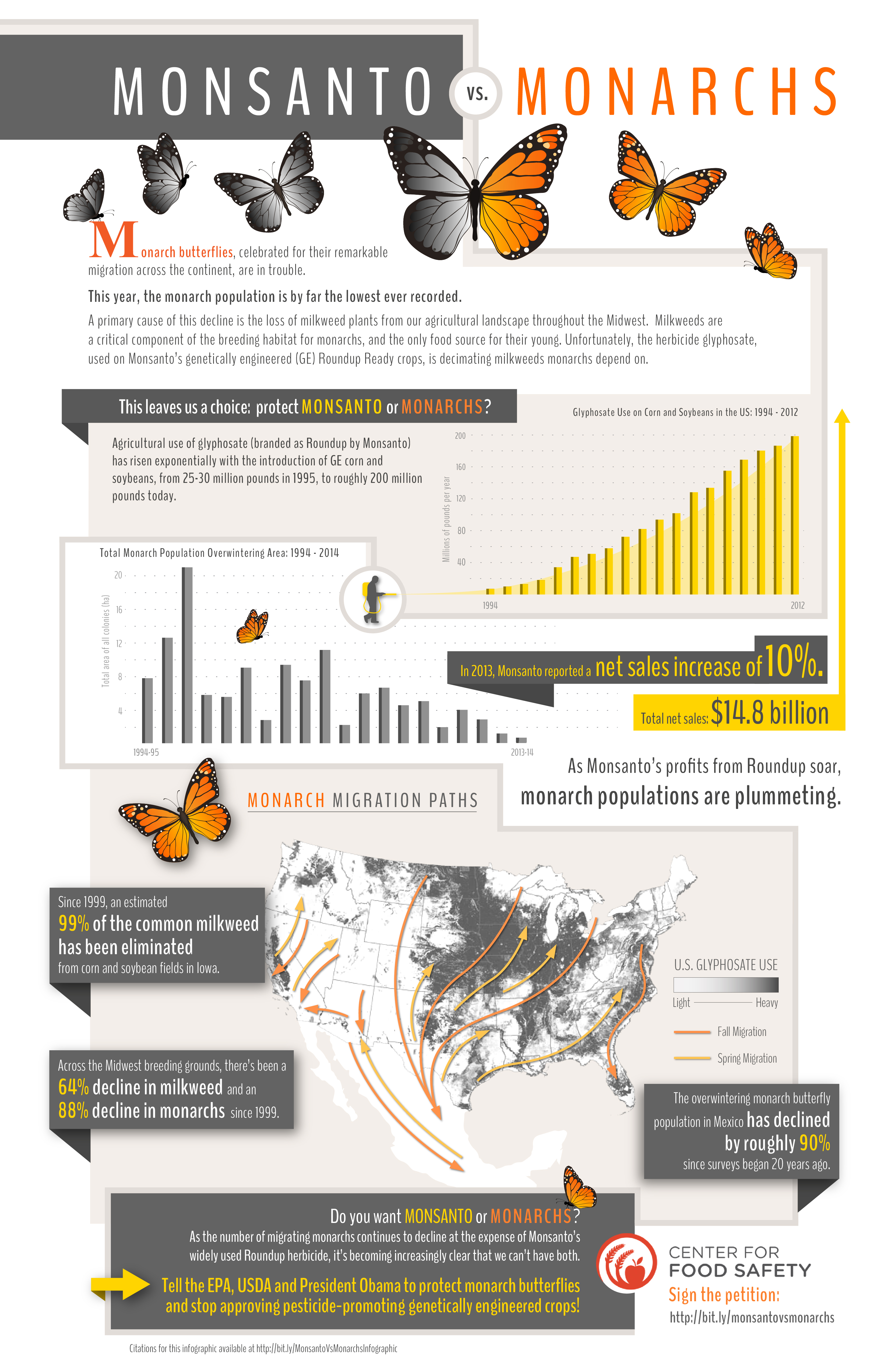 “We need to take immediate action to protect the monarch so that it doesn’t become another tragic example of a widespread species being erased because we falsely assumed it was too common to become extinct,” adds Sarina Jepsen, endangered species director at the Xerces Society.

“2014 marks the 100th anniversary of the extinction of the passenger pigeon, which was once so numerous no one would ever have believed it was at risk of extinction. History demonstrates that we cannot afford to be complacent about saving the monarch.” genetically engineered crops

“Monarchs are in a deadly free fall,” said Lincoln Brower, a pre-eminent monarch researcher and conservationist who has been studying the species since 1954. “And the threats they face are now so large in scale that Endangered Species Act protection is needed sooner rather than later, while there is still time to reverse the severe decline in the heart of their range.” genetically engineered crops

The Fish and Wildlife Service must now issue a “90-day finding” on whether the petition warrants further review. genetically engineered crops