Have you ever watched someone speaking as light hits their lips? Suddenly you can see saliva spraying. Though it happens all the time, you usually don’t see it without illumination. It’s the same with pesticides. You don’t “see” the drift, and yet they mutate our cells and kill Mother Earth. They synergize and cause myriad negative effects, ranging from allergies to developmental delays.

A recent, multisite California-based study at the University of California Davis MIND Institute examined associations among specific classes of pesticides, including organophosphates, pyrethroids, and carbamates, all of which were applied during the pregnancies of the study’s participants. A statistically significant number of the participants’ children were later diagnosed as autistic or suffered other developmental disorders. Risk of autism decreased as distance from the pesticide site increased.
developmental disorders
In fact, the researchers said, pregnant women who live in close proximity to poisonous fields and farms face a two-thirds increased risk of giving birth to an autistic child. And the likelihood for autism increases the further along in a pregnancy you are.

Autism is characterized by difficulty in social interaction, verbal and nonverbal communication, and repetitive behaviors or movements. According to the Centers for Disease Control and Prevention, nearly one in 68 children in the United States have an autism spectrum disorder. There is no known cause for autism, but environmental factors have been a focus of study for the past several years. 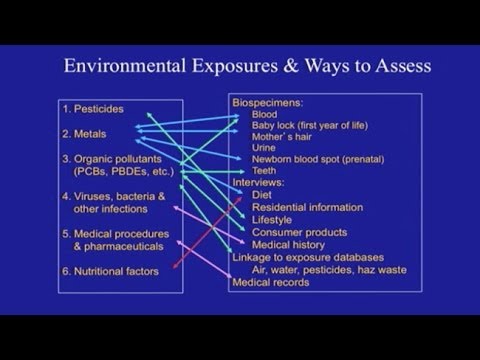 Other Indications that Pesticides Cause Developmental Disorders

The U.C. Davis study is not the first to report a possible link between autism and agricultural-pesticide exposure. A 2007 study by the California Department of Public Health found children born to mothers who had been exposed to two organochlorine pesticides during their first trimester of pregnancy were six times more likely to develop autism and other developmental disorders than a control group whose mothers did not live near fields.

“This study validates the results of earlier research* that has reported associations between having a child with autism and prenatal exposure to agricultural chemicals in California,” said lead study author Janie F. Shelton, a U.C. Davis graduate student who is now a consultant for the United Nations. “While we still must investigate whether certain sub-groups are more vulnerable to exposures to these compounds than others, the message is very clear: Women who are pregnant should take special care to avoid contact with agricultural chemicals whenever possible.”
developmental disorders
All beings — pregnant or not — should avoid these poisons whenever possible. Communities in Minnesota, farm workers in California’s fields, and pollinators all over the nation are paying the price and getting ill while Big Agriculture rakes in the dough.

Take, for instance, California. It’s the top agricultural producer in the nation, grossing $38 billion in revenue from farm crops in 2010. Statewide, approximately 200 million pounds of active pesticides are applied each year. The research included four classes of pesticides: organophosphates, organochlorines, pyrethroids, and carbamates. The pesticides are used on a variety of crops in the state’s Central Valley, such as cantaloupes, melons, oranges, tomatoes, cotton, and alfalfa.

Twenty-one chemical compounds were identified in the organophosphate class, including chlorpyrifos, acephate, and diazinon. The second most commonly applied class of pesticides was pyrethroids, one quarter of which was esfenvalerate, followed by lambda-cyhalothrin permethrin, cypermethrin, and tau-fluvalinate. Eighty percent of the carbamates were methomyl and carbaryl.

According to a press release issued by U.C. Davis, “Because these pesticides are neurotoxic, in utero exposures during early development may distort the complex processes of structural development and neuronal signaling, producing alterations to the excitation and inhibition mechanisms that govern mood, learning, social interactions, and behavior.”

Imagine what these toxins do inside little bodies when they come into contact with one another; if one pesticide alone can cause developmental disorders, there’s no telling the havoc wreaked on the mind of a developing fetus when two or more chemicals are present and reacting with each other.
developmental disorders
“In that early, developmental, gestational period, the brain is developing synapses, the spaces between neurons, where electrical impulses are turned into neurotransmitting chemicals that leap from one neuron to another to pass messages along. The formation of these junctions is really important and may well be where these pesticides are operating and affecting neurotransmission,” said Dr. Irva Hertz-Picciotto, senior author of the report and professor and vice chair of the Department of Public Health Services at U.C. Davis.

He added that families living close to agricultural fields may want “to leave town or keep their children away, or close the windows” on days when pesticides are being applied.

What kind of world is that? It’s one just as bad as one without honeybees. developmental disorders

*Researchers acknowledged the limitations of their study into developmental disorders due to other potential sources of pesticide exposure, such as foods containing pesticides, residential, indoor use of chemicals, and outdoor use for pest control.