Palm oil is used in a mind-boggling range of everyday products including shampoo, toothpaste, and Nutella. In total, 50 million tons of palm oil is produced annually.

As a result, tens  of millions of acres of forest have been cut down to make way for large-scale palm oil plantations, lending to deforestation, habitat degradation, climate change, animal cruelty, and indigenous rights abuses. There are more sustainable oils out there that offer more nutrition.  But what is the likelihood of giving up an iconic product like Nutella for the sake of Mamma Earth?

Italy and France are going at it again, this time it’s a food fight over Nutella, arguably the world’s most popular ‘chocolate’ hazelnut breakfast spread. About 365,000 tons of Nutella is made each year (about the same as the weight of The Empire State Building).

Earlier last week, Ecology Minister Ségolène Royal stated on the French television network Canal+ France that, “We have to replant a lot of trees because there is massive deforestation that also leads to global warming. [Therefore] we should stop eating Nutella, for example, because it’s made with palm oil.”

Incidentally this is not the first time the French call out Nutella. Two-and-a-half years ago, French senators tried to impose a 300% tax on palm oil, saying it was dangerously fattening and its cultivation was bad for the environment. The measure was defeated.

Palm oil has contributed to deforestation in recent years and scientists have linked it to climate change. Cutting down on palm oil use is seen as a key part of curbing deforestation and carbon emissions. Palm oil is in about half the packaged foods in any given grocery store, as well as health and beauty products. Worldwide, oil palm plantations cover 40.6 million acres—an area larger than the entire state of Georgia, according to the Union of Concerned Scientists. Emissions due just to oil palm cultivation in Indonesia accounted for an estimated two to nine percent of all tropical land use emissions from 2000 to 2010. Read The Guardian’s article, Palm Oil Companies Exploit Indonesia’s People, to learn more about the negative effects of palm oil.

This sustainably harvested nut butters blow Nutella out of the water. Just As Yummy. But Raw and Organic With actual nutritional benefits!

Of course Italians, the passionate and fiery people that they are, retaliated.

Several others also called on Royal to apologize. For instance, another politician tweeted, calling her comments a “grave and ugly” insult. Meanwhile the Italian business newspaper Il Sole 24 Ore said the French minister’s “crusade” was wrongheaded and that a Nutella boycott would do nothing against deforestation.

The media and Nutella-holics also grabbed on tight to their chocolate brown-colored spoons and revolted against the comment.

“Some days you just have to eat #nutella with a spoon. #chocolate is necessary,” wrote one person via Twitter. Another tweeted, “I will NEVER stop eating Nutella. NEVER.”

I found another comment from an angry Nutella lover: “Calling for her (Royal) to apologize? She should be fired. It’s not the role of an environment minister to declare ‘Buy or do not buy X product because Y!’ that’s patently insane.”

In a world where corporations have more and more power, if a minister of the environment doesn’t speak up, who will?

By the way, ding dong, Nutella is NOT chocolate. The Nutella of today has no nutritional value and is mainly made up of sugar and palm oil. Nutella contains 10.5 percent of saturated fat and 58 percent of processed sugar by weight. After sugar and palm oil, the ingredients are hazelnut, cocoa solids, and skimmed milk. Whey powder (made from cow secretions) is also added to the mix because it acts as a binder for the paste.

Basically, one tablespoon of Nutella has about 11 grams of sugar, 100 calories, and six grams of fat.

In the United States, Nutella contains soy products (likely genetically modified). Nutella is marketed as “hazelnut cream” in many countries. But under Italian law, it cannot even be labeled as a “chocolate cream” as it does not meet minimum cocoa solids concentration criteria.

Two tablespoons of Nutella (the amount it takes to spread on a slice of toast) has as much sugar as FIVE OREO COOKIES.

Welcome to cancer. Nutella is basically a highly-addictive spreadable candy.

One ‘reporter’ I came across on YouTube actually said making Nutella with something other than palm oil wouldn’t’ make it as good. What? How about coconut oil or something that is not ruining Malaysia’s biodiversity and killing orangutans?

Do you really think that this version of Nutella is the original one created back in 1946? It doesn’t take a genius to determine that the recipe was modified over time with cheaper ingredients to maximize profits.

The older recipe, which was called Gianduja, was a mixture containing approximately 71.5 percent hazelnut paste and 19.5 percent chocolate. It came in solid loaves wrapped in aluminum foil, which had to be sliced with a knife, and was succeeded by a spreadable version Supercrema.

In the United States, Ferrero was sued in a class action for false advertising leading to consumer inferences that Nutella has nutritional and health benefits from advertising claims that Nutella is ‘part of a nutritious breakfast.’ In April 2012, Ferrero agreed to pay a three million dollar settlement (up to four dollars per jar for up to five jars in returns by customers). The settlement also required Ferrero to make changes to Nutella’s labeling and marketing, including television commercials and their website.

Listen to this report from Reuters about Nutella Gate:

In a statement, Ferrero insisted all its palm oil—which comes mainly from plantations in Malaysia—is sourced in a “responsible” way.

Then Greenpeace, likely because Ferrero has taken steps to minimize the environmental impact of palm oil, came to bat for Ferrero, stating that it’s one of the more progressive consumer-facing companies with regards to palm oil sourcing.

“Greenpeace is not in favour of boycotting products containing palm oil. While palm oil production is linked to deforestation and social conflict, it is also a valuable contributor to the economies and livelihoods of local communities in countries like Indonesia. Calling for a blanket boycott of this agricultural crop will not solve problems in its production,” says Suzanne Kroger, Greenpeace Netherlands Palm Oil Coordinator.

The World Wildlife Fund also applauded Ferrero for its efforts. 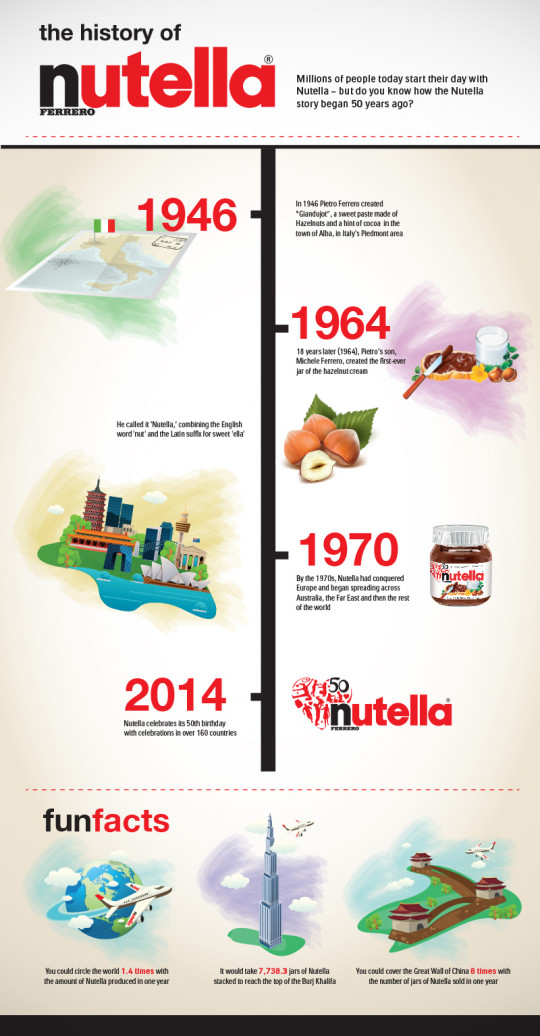 According to a statement issued by the company:

“Ferrero sources approximately 170,000 metric tons of palm oil annually, which represents a mere 0.3% of the worldwide palm oil production of 60 million metric tons. This indicates that Ferrero’s impact on the palm oil supply is quite marginal.

All Ferrero products sold globally are produced with palm fruit oil that is 100% certified as sustainable, according to the Roundtable on Sustainable Palm Oil (RSPO).

Since 2005, Ferrero has been an active member of RSPO, the international organization that sets the standards of good practices for palm oil production with respect to the environment and local communities.

Importantly, Ferrero’s responsibility does not stop at certification. Its commitment continues through its Palm Oil Charter, launched in 2013 to address the leading causes of deforestation and to create a balance between the conservation of the environment, community needs and economic benefit and viability.

This charter includes 10 criteria which suppliers from the plantations in which Ferrero sources must implement. Ferrero collaborates with these palm oil suppliers to ensure they are:

Many would argue however that no palm oil is ‘responsibly’ planted and that the deforestation destroys the habitat of an enormous variety of animal and plant species.

“Palm oil is not sustainable,” adds tree activist and lawyer Jennifer Leigh Smith. Companies can get certification to say whatever they pay for! Forests of palm oil are not forests! They are islands of fragmentation using heavy rodenticides and no biodiversity. If a farmer plants a few along with other crops without cutting down forests to do it, then that would be sustainable.”

Eventually, Sognel revoked her statement via Twitter and all was okay in the world again.

How Might High Dose Melatonin With SandMan Support Your Health

Alkalinity Of Water: Is It Good To Drink So Basic?