Do you indulge in sushi? Make a mean risotto? Feed your child infant rice cereal? Considering there are high levels of arsenic in rice and so few regulations on its production, it would be wise to reconsider how much of this grain goes on your plate.

Arsenic occurs naturally in our environment and can be found in soil, water, and air. In recent years, there has been a lot of arsenic contamination. Although various regions of the world have different contamination levels, the principle is the same: as we ingest more foods laced with small doses of arsenic, we slowly become our own executioner.

“Rice accumulates arsenic faster than any other plant,” says Dr. Scott Schreiber, a chiropractic physician double board certified in rehabilitation and clinical nutrition.

As an odorless, colorless, and tasteless poison, arsenic has been used since ancient times as the perfect assassin’s weapon. It was known as the King of Poisons throughout the Roman Empire, especially during the Middle Ages and Renaissance, and its symptoms were difficult to detect. Resembling food poisoning, arsenic led to abdominal cramping, diarrhea, vomiting, and finally death from shock.

For a more subtle form of poisoning, arsenic would also be given in smaller doses over a period of time. The results were a loss of strength, confusion, and total paralysis.

Flush Out Arsenic With The Body Ecology Cleanse Kit

Arsenic easily dissolves in water, and rice is more susceptible to arsenic contamination because it is grown in both soil and water. Many crops are sprayed with pesticides which run off into nearby water sources. Paddy fields where rice is cultivated become flooded with this toxic water runoff; the rice is cultivated and sent to the market, full of arsenic.

Incidentally, rice consumption from 2013 to 2015 in the United Sates increased from 3.9 million metric tons to 4.1 million metric tons , possibly due to an effort to reduce protein intake from animals due to antibiotics, super bug infestation, and genetic modification.

Arsenic is also present in flour, corn, wheat, beer, and fruit. Any food grown in soil should be suspected of arsenic toxicity, especially with the continual use of pesticides on crops.

Tracy Punshon, PhD, a research assistant at Dartmouth College, performed x-rays on rice to locate exactly where arsenic is stored. Her research discovered arsenic in the germ of rice grains. The germ is the seed’s embryo. The process of milling removes the husk to produce brown rice. After that, the rice is repeatedly milled, removing the bran and germ to produce white rice. Removing the germ decreases the amounts of arsenic present, making  white rice generally less concentrated with arsenic than brown rice.

Even foods labeled as organic should be scrutinized. Typically if the land has been highly farmed with no crop rotation for decades and little regulation and constant pesticide spraying, the soil is still rich with arsenic.  So even if no pesticides are sprayed on the current rice crop, the build up of arsenic in the soil still gets into the rice.

“It is believed that as pollution increases, inorganic arsenic is formed and contaminates soil and water,” says Schreiber. “It is found in pesticides, herbicides, wood preservatives, phosphate fertilizers, industrial waste, mining activities, coal burning and smelting.”

In 2011, researchers at Dartmouth discovered as little as half a cup of rice had as much arsenic present as a liter of water with 10 parts per billion of arsenic.

The FDA has set a 10 parts per billion standard for apple juice, similar to the maximum allowed for water. Unfortunately they have done nothing to regulate arsenic in food.

The Internal Agency of Research on Cancer (IARC) has labeled arsenic, arsenic compounds, and arsenic in drinking-water as carcinogenic to humans. According to the World Health Organization (WHO), prolonged exposure to inorganic arsenic, the more toxic of the two, can lead to skin lesions and hyperkeratosis. Both are a precursor to skin cancer. Adverse health effects from arsenic also include:

In parts of the world where rice is a main staple of the diet, both the rice and the water supply contain high levels of arsenic, leading to public health issues, such as skin lesions, cancer, birth defects, decreased intelligence, vascular disease, high blood pressure, type II diabetes, and death, explains Schreiber.

The Inner Workings Of Arsenic

Arsenic comes in two forms: organic and inorganic. Both forms relate to its scientific form and have no relevancy to what we consider organic in foods. It does not occur by itself and is usually bound with other minerals.

In the United States a water standard of .05 mg/L was established for all groundwater, by the Public Health Service in 1942. In 2006 it was lowered to .01 mg/L. Under the new standard 35 perfect of water-supply wells became unusable in Arizona; in California 38 percent.

Where Your Rice Is Grown Matters

A 2007 study compared 107 rice samples grown in Louisiana, Mississippi, Texas, Missouri, and Florida to 27 rice samples grown in California. Researchers found that rice processed in those southern and central states had higher concentrations of arsenic compared to rice processed in California. The samples for the southern and central states averaged 4.4 micrograms (mcg) of arsenic per serving, and the California samples averaged 2.5 mcg per serving. Arsenic levels in California were 41 percent lower in comparison to the other states.

In the same study, researchers also discovered organic brown rice from California had the lowest concentration of all samples at 1.5 mcg per serving. So although removing the bran and germ to make white rice reduces the arsenic present, some brown rice can still contain lesser traces of arsenic.

Researchers also found that basmati rice from India and Pakistan, as well as jasmine rice from Thailand contained the least amount of arsenic compared to other countries. In the United States, agriculture has been devastated for years due to poor regulations on crops and pesticide use. This may be the reason rice grains have higher concentrations of arsenic compared to other countries.

Different soils have varying levels of arsenic contamination. Consider this study done by the FDA which studies different soils from countries to test for arsenic toxicity.

It is difficult to always guarantee that a specific country or state will offer the least toxic rice for you to consume. Resources, and finding brands that provide readings of their soil, water, and rice arsenic levels, should bring more comfort in buying decisions.

If you’re worried about arsenic in your rice but still want to get all the health benefits of grains, consider these alternatives:

Wash Thoroughly And Use More Water To Cook

Research also suggests rinse washing and cooking rice in a higher water to rice ratio reduces the concentration of arsenic. Basmati rice showed a decrease in 10 percent of inorganic arsenic through rinse washing. Researchers also found a 35 percent to 45 perfect decrease in arsenic concentration when using a cooking water to rice ratio of 6:1. Although rinse washing only proved highly effective for basmati rice, both methods combined can decrease the arsenic content of rice.

Arsenic content can be reduced by thoroughly washing and cooking the rice in clean, uncontaminated water; purchasing organic rice, using plenty of water when cooking, and avoid purchasing rice that was grown in the dry season,” adds Schreiber.

Consider all your options before you grab that next bag of rice. Import, grain alternatives, organic brands, rinse wash and increasing the water to rice ratio will greatly reduce toxicity and all the dangers associated with arsenic.

Why Your Child Should Eat Less Rice 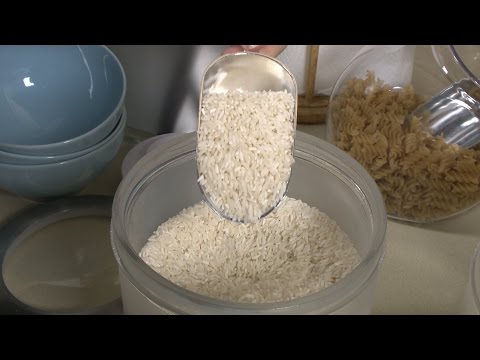